ESG & Tech Show – What is driving fintech and is it investable today?

ESG & Tech Show – What is driving fintech and is it investable today?

In the latest ESG & Tech show episode, I discussed fintech, what drives it and whether it’s an investable theme right now. For those of you unfamiliar with the term, fintech is financial technology. It includes everything from payments, online banking, buying and selling shares … and even VectorVest itself is an example of a fintech company as it provides financial information through technology.

I started by highlighting how I created my watchlist of stocks:

I encouraged the audience to share their ideas too and together, we had 16 stocks including Goldman Sachs, the S&P 500 Growth ETF, the Fintech Acquisition company, and the Global X ETF. Mecadolibre, ARK Fintech ETF, Shift4 Payments, Block, Lightspeed, Shopify, Faraday Future, PayPal, UP Fintech, Lexinfintech, Upstart Holding, and Paysafe. 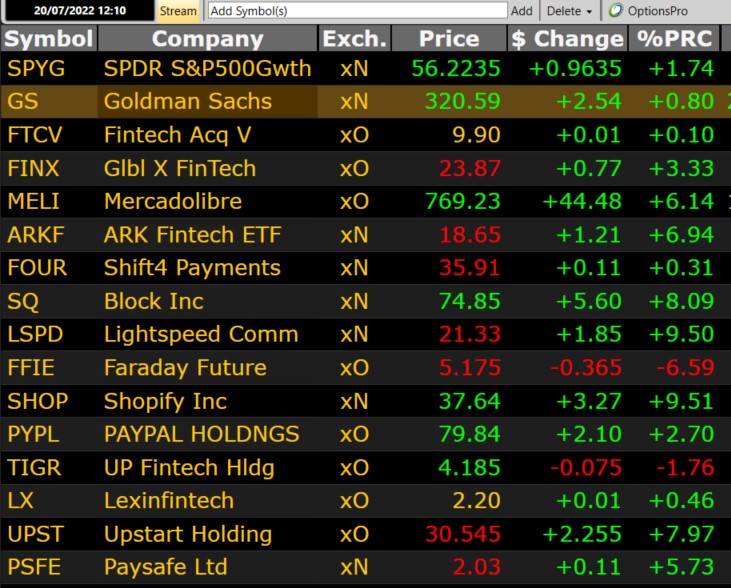 Interestingly, this watchlist was up by an average of 4.83% by the time the show finished, and thus, it was a good day to examine the theme!

Before we got stuck into analyzing the stocks and ETF list, it’s worthwhile considering what drives this industry. Among others, two key economic indicators help us understand where fintech is going and they are consumer spending and digital payments. The first is relatively healthy and the second is very positive indeed.

Globally, we spend $1.4 million per second. In the US, “personal income increased $113.4 billion (0.5 percent) in May, according to the Bureau of Economic Analysis, Disposable personal income (DPI) increased $96.5 billion (0.5 percent) and personal consumption expenditures (PCE) increased $32.7 billion (0.2 percent)”. According to Statista, the total transaction value in the Digital Payments segment is projected to reach US$8.49tn in 2022, and from a global comparison perspective, it is shown that the highest cumulated transaction value is reached in China (US$3,497.00bn in 2022). The same source points out that in 2021, retail e-commerce sales amounted to approximately 4.9 trillion U.S. dollars worldwide. This figure is forecast to grow by 50 percent over the next four years, reaching about 7.4 trillion dollars by 2025. All told, the future looks bright. However, we have to understand that there are low barriers to entry, high regulation requirements, little customer loyalty, and ever-growing demand for speed, accuracy, and transparency. The industry may have the right macro drivers but have the stocks the right profitable and investable prospects?

As you will see in the full episode, we talked through a variety of things we wanted to either include or exclude as looked through the list. We set up a Unisearch to create a filtered view out of our watchlist so that we had the best of both worlds – both the ability to see every stock in the Watchlist Viewer, as well as the power of Unisearch, selecting only what appealed.

Specifically, some stocks had Sell Recommendations (i.e. where their price had fallen below the Stop) so we wanted to root that out. A small number of stock had very, VERY high PE ratios and we wanted to put a cap on that. An even smaller number had earnings going in reverse so we wanted to take that away.

Here is how we achieved that goal:

Interestingly, by the time we did all that, we didn’t have any stocks left! Now, that’s not an issue. It’s okay to be choosy. You don’t have to take a position just because you feel like it, the environment (i.e. market timing) and the stock choice need to be right. We have our Unisearch built for when everything falls into place.

The final aspect of the episode picked up on the top VST stock (as distinct to ETF) on the list, namely Goldman Sachs. Fundamentally, the PE ratio was at just 7.82, the dividend yield was at 2.5% and the earnings per share was at 40.85. Of course, it’s a HUGE company that is a global household name too. Apart from those reasons, it’s piquing our interest because its RT (Relative Timing) has bounced right up over 1 and so, it shows that buyers are winning against the sellers for now. We will be watching this space.